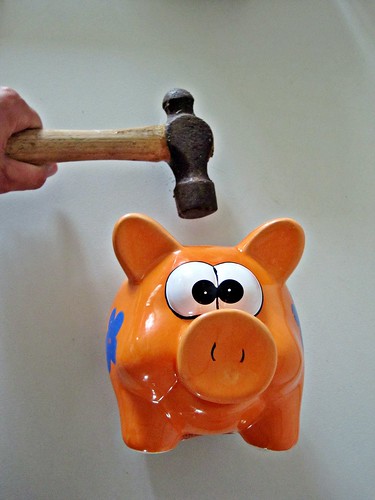 Many people advocated buying a 5-year CD from Ally Bank even if you need the money sooner or using the higher yielding 5-year CD as a cheap option in case interest rates go up, because you would come out better off even after paying the low early withdrawal penalty. This policy change adds significant risk to that strategy.

The highlighted part gives Ally Bank the right to refuse early withdrawals. Although the bank may not always exercise that right, it has it in its pocket.

I would hope this change only affects new CDs sold after September 27, 2012, not existing CDs sold before that date, but I’m not sure. One customer reported that Ally customer service reps are instructed to say that this is a clarification of existing policy, meaning it applies to both new and existing CDs.

With the unconditional option to break the CD gone, you should plan on holding a CD to maturity and not count on breaking it early, as what a CD means originally. When you hold a CD to maturity, what the early withdrawal penalty is doesn’t matter.

Ally Bank is no longer the rate leader among online banks. Two other online banks, Discover Bank and CIT Bank offer better rates in some terms.

Although the rate differences don’t seem much, if you are going to lock into a CD, you might as well lock into a higher rate. Unlike a savings account, once you lock into a CD, the rate on the CD can’t be lowered. So you don’t have to worry about whether a bank offering good rates today will continue to offer good rates next year. On you are in, you are in it for the whole term.

[Rates were obtained from respective banks’ websites on Oct. 24, 2012. They are of course subject to change by the banks before you lock in.]