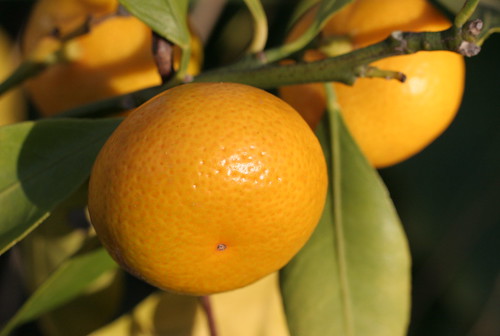 I have a tangerine tree in my front yard. Some told me it’s the Satsuma species but I’m not sure. They don’t look like the Satsumas I see in grocery stores.

One day the door bell rang when I was cooking lunch. A woman said she was driving by when she saw the tree. She was wondering if she could have some tangerines from my tree. Because the fruits were still small, I told her they weren’t ready yet.

After she left I scratched my head thinking what would make someone want something from someone else badly enough to stop and knock on the door. Tangerines sold in the stores are not that expensive. If she wants them, she can certainly buy them. It would never occur to me that I would knock on someone’s door asking for their stuff.

She’s actually one of the more polite ones. Others just pick the fruits from the tree without asking. This species has soft skin. If you just pluck fruits from the tree, it will leave a piece of the skin on the stem, making the tree look ugly. I end up using a pair of scissors cutting the ends off. They eat my fruits. I clean after them.

I thought the bible said something about Thou Shalt Not Covet. There’s also a saying in my culture against gains if you haven’t put in the labor.

I think a key to financial success is a low desire for material possession. Some time ago I was at a business conference. When I plugged in my phone to the charging station the conference set up for the attendees, the guy next to me said “Old school, huh?” I had a Google Nexus One. It was only two years old. It still works just fine.

Over the Thanksgiving weekend I watched some episodes of the TV show Say Yes to the Dress on Netflix streaming. If you haven’t watched the show, I highly recommend it. Each episode is only 20 minutes. It’s entertaining and you learn something about personal finance. For example, is a $5,000 dress still expensive if your father/mother/fiancé is paying for it?

It’s easy to save money if you don’t want stuff as much as others.