A few years ago Barclaycard made the Priceline Rewards Visa card best-in-class at that time. It offered 2% rewards on everything, with no annual fee. I got the card. So did many readers.

After the rewards were dialed down for new customers, existing cardholders kept the original terms. I still have the card although I haven’t used it much after I got the Bank of America Travel Rewards Visa card that gives 2.625% rewards on everything.

Recently Barclaycard enhanced the rewards on the Priceline Rewards card. Grandfathered customers get the enhancements too. The foreign transaction fee is removed. If you redeem the points against a travel charge, you get 10% of the points back. Points are worth 50% more if you redeem against a Priceline Name Your Own Price, Express Deals, or Pay Now purchase.

If you are grandfathered to the old terms, now the card becomes a 3.33%-rewards card for every purchase after you book a hotel with Priceline’s Name Your Own Price, Express Deals, or Pay Now.

When you book a hotel using Priceline’s Express Deals, you know the area, the star rating, and the price, but not the name of the hotel. A third-party iPhone app called Exp Deals Hotel says it can help you guess the name of the hotel. It’s still not refundable, meaning that you should book only when you are absolutely certain of your travel plans.

I booked a few Priceline Express Deals recently. It may not be the best every time, but I think on balance it offers a good combination of convenience, price, and quality.

I would still shop around and see if there’s anything better. After I book Priceline Express Deals though, the Priceline Rewards card gives 3.33% on every charge up to 30x the cost of the Priceline purchase in the next 120 days. Here’s how the math works: 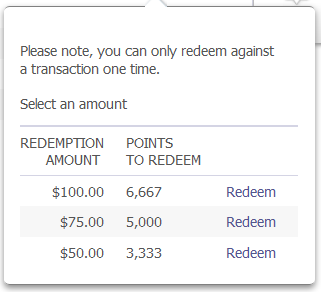 I emphasize after because if you don’t know when you will use Priceline Name Your Own Price, Express Deals, or Pay Now you may be carrying too many points before you have an opportunity to cash them in at the best rate. After you have an eligible Priceline charge, you have a target. When you hit the target by earning and redeeming enough points, you can put the card aside until you have another eligible Priceline purchase.