The previous post Converting to Roth and Harvesting Capital Gains Under Obamacare Premium Subsidy shows when you are getting a premium subsidy for buying health insurance on the exchange under Obamacare, you face a marginal tax rate of about 25-30% for ordinary income and 10-15% for long-term capital gains, when normally ordinary income would be taxed at 15% and long-term capital gains would be tax free.

Before anyone complains about such high marginal tax rates at modest income levels, we should note that the marginal tax rate alone tells a very distorted story. The true measure of tax burden is the effective tax rate, in other words, the total tax paid on the total income received.

When you get a premium subsidy for buying health insurance under Obamacare, your effective tax rate is often negative. Additional income will push that negative number up, from “very negative” to “not so negative.” It is a 25-30% marginal tax rate alright but it’s hardly something worth complaining about.

For instance, suppose a married couple retired at age 60 on $40k of income from pre-tax IRA withdrawals. Suppose the cost of second least expensive Silver plan on the exchange costs $1,500 a month for the two of them. They will receive a $14,700 tax credit for buying health insurance. Their federal income tax before the tax credit is $5,100. After the tax credit, they are paying negative $9,600 in federal income tax. 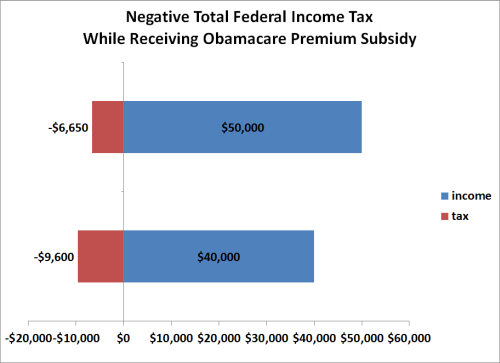 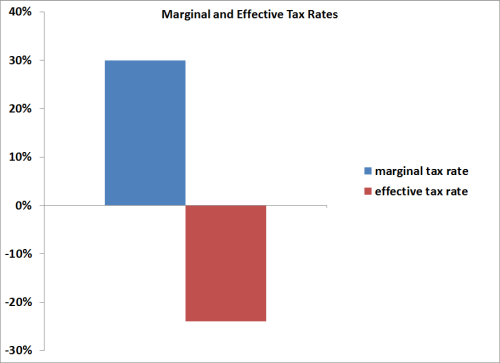