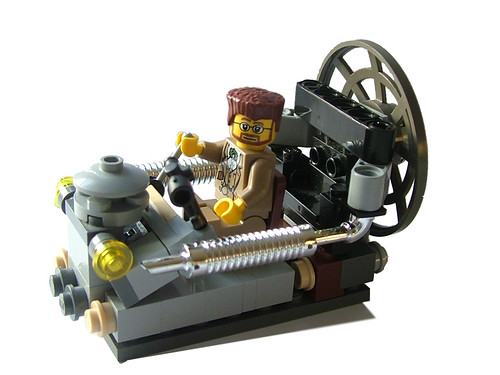 [This is a guest post from Bogleheads investment forum participant Bob’s not my name as a follow-up to his previous post How to Build a Time Machine With IRAs – Part 1.]

In Part 1 we discussed how your money can use a deductible traditional IRA to travel forward in time and to a different place to find more favorable tax treatment. In Part 2 we’re going to look at using a Roth IRA to travel backward in time.

Let’s consider a 30ish couple who are now in the 15% federal bracket with a 5% state tax, the full effect of which they feel because they don’t itemize. 20% total marginal rate.

Now grasp the bony hand of the Ghost of Taxes Future and fly with him to 20 years hence. The couple now have three kids aged 19, 18, and 13. They are making good money, but a lot of it is going into the insatiable maw of government. They’ve moved to an 8%-income-tax state. They itemize now so their state tax is deductible.

It’s not just the government that wants their money. Their kids’ colleges want it, their mortgage lender wants it, and their 13-year-old wants it to buy ice cream. During these intense family years (which do pass) they can’t afford to contribute $22,500 to a 401k and $6,000 to a spousal traditional IRA, but at such high marginal tax rates they can’t really afford not to contribute, either.

Solution: they withdraw from their Roth IRA to make it possible to max their pre-tax retirement accounts. It’s effectively a Roth IRA conversion to a traditional 401k. You can withdraw Roth contributions (but not earnings) at any time without penalty.

This doesn’t change the foundation message that you should max out all your tax-advantaged options every year. But most people can’t afford to, especially in the high tax, high spending family years, and frankly don’t need to to enjoy a comfortable retirement. A working couple can contribute more than two million to tax-advantaged accounts over the course of their careers, and so can have many millions to retire on.

Caveat: if you are relying on your Roth contributions to cover an emergency that is not unemployment, disability, or death, you may not want to do this.

Thus you have completed your Time Machine. It has two levers. A traditional IRA allows you to travel forward in time clutching a bag of money, while an old Roth IRA contribution allows you to grab your bag of money and go back in time to the halcyon days of your youth when your bracket was low.

Reverse time travel is always more perplexing to the mind, but bear with me on the metaphor here. Essentially what you’re doing is wresting $10,000 of your current income from the clutches of the federal and state governments (who want 40% of it), hopping in your Time Machine, and traveling back to your low tax rate and low tax state of 20 years ago. When you arrive, you alight from your Time Machine and gladly pay the governments 20% instead of 40%.