Reader KD asked me to comment on the repercussion of interest rate on savings being lower than inflation because the Fed is holding the short-term interest rate close to zero.

It has been this way for several years now. The same thing happened in early 2000s when the Fed cut rates and held them too low for too long. It fueled the real estate bubble. 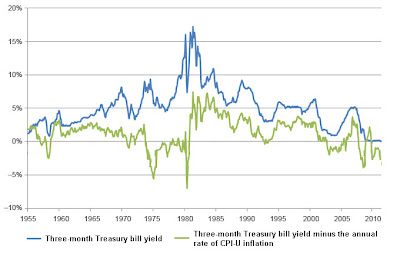 The chart shows the real interest rate on short-term savings — the rate after inflation — has been negative pretty much since 2002, except two brief periods when it popped up its head above zero.

It also stayed negative for about 10 years in the 1970s. Real interest rates were more negative back then. As low as the real interest rates are now, I shudder to think they would go even lower, as a result of near zero nominal rates and high inflation.

Mr. Davis pointed out that savers have paid the price as a result of stimulus policies.

"Since December 2007, personal interest income has declined by close to $100 billion. The modest economic growth the nation has experienced since 2008 has come, to some extent, at the price of a negative real rate of return for savers."

Besides the blow in income, I think it’s more dangerous that savers are being pushed to take more risk. In search of a positive real return on their money, the savers can:

The game is to ride the wave on the way up and get out soon enough. Some people made a lot of money in the last real estate bubble. It takes an iron will not to play this game.

There isn’t really much you can do about negative real interest rates. Complaining doesn’t get you anywhere. I’m not smart enough to figure out which wave I should ride or when to get out. As I mentioned in previous posts, my fixed income investments are in FDIC insured savings accounts, short and intermediate term munis, and long term TIPS. I’m waiting it out.