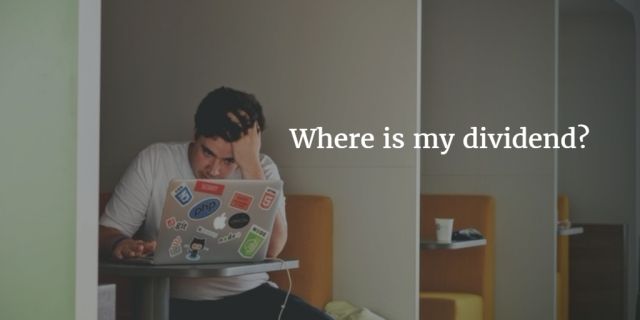 Is it a problem that the Fidelity fund pays dividend only twice a year when the Vanguard fund pays four times a year? Do you get more compounding when you get dividends more frequently? Moreover, is it a problem if a fund skips a dividend? If that happens, where did the money go? Into the fund manager’s pockets?

From an investment returns point of view, how frequently a fund pays dividends does not matter. A fund buys stocks. Some of those stocks pay dividends. The fund gets them. The money goes into a cash pool. If some fund investors sell fund shares, the fund may just pay out of the cash pool instead of selling stocks. If the fund has enough cash, the dividends get reinvested into more stocks.

The fund pays out dividends only because they are required by law to pass all dividends received to the fund investors, so that the fund investors are taxed on those dividends (unless you hold the shares in a tax-advantaged account). The fund does not have to pass the dividends right away. It’s only required to pass them within the same year. A fund may choose to pay a dividend in April, but it doesn’t have to. Skipping one in April and waiting till December is not really a problem. Think of it as being automatically reinvested. When the fund holds the dividends received in the fund, the money isn’t stolen or misappropriated by the fund manager.

Some funds offered exclusively in 401k-type plans don’t pay dividends at all, because they are not required to do so when the fund has no taxable investors. Not paying dividends by itself doesn’t affect a fund’s performance.

Why are people concerned about a missing dividend then? Other than a possible misunderstanding of the significance of a dividend from a mutual fund or ETF, some investors may be spending the dividend or using the dividend for rebalancing. If a fund doesn’t pay a dividend when you need some money from it, you can always sell some shares yourself. A dividend is 100% taxable. Selling shares is taxable only on the capital gain, which is less than 100% of what you sell.

Don’t worry about how often a fund pays dividends or when it skips a dividend. If you need money from the fund, just sell some shares on your own.