Are you a saver? I bet you are. Did you know there’s a tax credit called Saver’s Credit that reduces your federal income tax if you save for retirement in an employer sponsored retirement plan (401k, 403b, etc.) or in an IRA? If you knew, did you ever receive it? I bet you didn’t.

I mentioned Saver’s Credit in one of my Friday roundups. I said it’s one of the most elusive tax credits.

I call it the “feel-good credit” because Congress created it to make itself feel good about helping low-income people save when in reality very few get it. When they get it, they get far less than what the credit first appears to offer.

What Is Saver’s Credit

Saver’s Credit, officially known as the Retirement Savings Contributions Credit, is a tax credit for saving for retirement. If you save at least $2,000, you can reduce your federal income tax by up to $1,000. It effectively works out to be a 100% match from other taxpayers ($1,000 out of pocket, $2,000 in your account). That’s on top of any match from your employer. It’s also on top of the normal benefits from a retirement account, for instance tax-free growth in a Roth account.

Who Qualify for Saver’s Credit

Because it’s free money from other taxpayers, Congress limited it to only people with low income. They need extra help because their low income makes it difficult for them to save for retirement on their own.

Depending on your income, there are three levels for this credit: 50%, 20%, and 10%. If your income is higher than the limit for the 10% level, you get nothing.

For a single person or a two-earner family, the income limit is set below the typical salaries of college graduates. A married, one-earner household will have an easier time to qualify for this credit. The table below lists the maximum Adjusted Gross Income (AGI) in 2013 for different tax filing statuses. See IRS Form 8880 for the latest numbers.

In order to make sure rich people’s kids don’t take advantage of this generosity, Congress also put in rules to say you must be at least 18 and you can’t be a full-time student during any part of 5 calendar months in the year. Congress also added another rule saying anybody claimed as a dependent on another taxpayer’s tax return can’t qualify. If parents want the tax deduction, their child can’t claim Saver’s Credit.

Watch Out for the Cliff 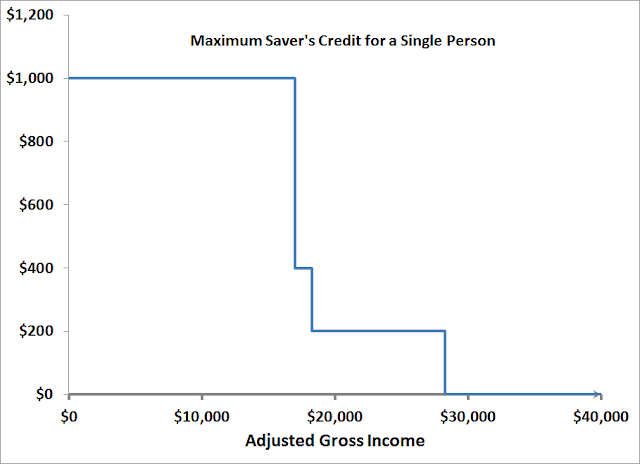 Finally, because it’s a tax credit, not just a gift from other taxpayers, Congress made Saver’s Credit non-refundable, which means the credit can reduce your federal income tax to zero but that’s it.

Is it realistic to expect a single person working full time earning less than $20k a year to save $2,000 for retirement? Not unless that person has other income that doesn’t show up on the tax return or the low income is only temporary.

A semi-retiree living on his savings and working part-time at a non-profit organization can qualify for the Saver’s Credit. His savings provides him income but that income isn’t income for tax purposes. In other words the income is low only on paper. His living standard isn’t low.

Someone taking a break from full time work in the middle of the year can qualify for Saver’s Credit. The low income is only temporary.

New college graduate in the first year of a full time job can qualify for Saver’s Credit (must graduate by April 30). Income from a partial year looks low even though the annual salary isn’t.

If all stars are aligned and you qualify for the Saver’s Credit, you claim it on Form 8880. If you use tax software, be sure to answer the questions about retirement savings even though you know your normally don’t have to report contribution to a Roth IRA. If you are right above a cutoff point, contribute to a Traditional IRA, which lowers your AGI and potentially qualifies you for the credit.