I wrote about tax credits last week. This time let’s look at tax deductions. First a recap of the difference between a tax credit and a tax deduction:

Above the Line Deductions

Above-the-line deductions are officially known as  adjustments to income. The “line” refers to the last line on page 1 of your Form 1040 or Form 1040A, which is labeled adjusted gross income (AGI). 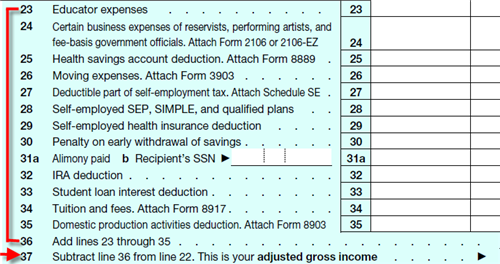 Therefore a $100 above-the-line tax deduction is better than a $100 below-the-line deduction.

I do want to point out just because an expense is tax deductible, it doesn’t mean you can actually take the deduction.

I know it sounds weird but it’s true. It took me a while to figure out many exciting deductions are only deductions in theory. Most people can’t really take them. This is because some deductions must first clear a floor before they can be deducted.

For example medical expenses are tax deductible, but you can only deduct the portion which exceeds 10% of your AGI. For many people that means zero.

Theft losses are also tax deductible, but only the portion which exceeds 10% of your AGI. That’s a very high hurdle.

Safe deposit box rental fees and tax preparation fees are also theoretically tax deductible, but few people can actually deduct them because they fall into a bucket called miscellaneous deductions, which are subject to a floor of 2% of AGI. All your miscellaneous deductions added together must exceed 2% of your AGI before you can deduct anything.

The following table lists some of the tax deductions (as of 2013 tax year) in alphabetical order. I’m not enumerating miscellaneous deductions here because there are simply too many. All the links point to the official IRS web site for that topic. Every tax deduction has a unique set of qualification rules. Out of 20 tax deductions listed here, 12 are above-the-line; the other eight are itemized deductions.

Isn’t it a mess or what?