As I mentioned in last Friday’s post, I had interviews for a new job. The interviews went very well. They liked me; I liked the company and the job. After the interviews, the hiring manager gave a verbal go-ahead. Now I’m handed off to HR to talk about the compensation package.

This turned out to be a good exercise to take an inventory of my current compensation. My unvested RSUs became a point of discussion. I come to realize how strongly these to-be-vested RSUs act as golden handcuffs.

RSUs are Restricted Stock Units. They are basically a deferred bonus calculated and paid in shares of the employer’s stock. Unlike a cash bonus, you don’t get it right away. They become yours ("vest", "lapse" or "released") over a number of years. Mine vest 25% each year over 4 years.

When you first get the RSUs, it’s not that big a deal. After you divide the value by 4, it comes out to just a few percentage of your salary.

Things get really interesting by the end of the 4th year. You are collecting 1/4 from each lot granted in the previous years, for the full value of the annual grant. This continues as each year goes by, as shown in the chart below: 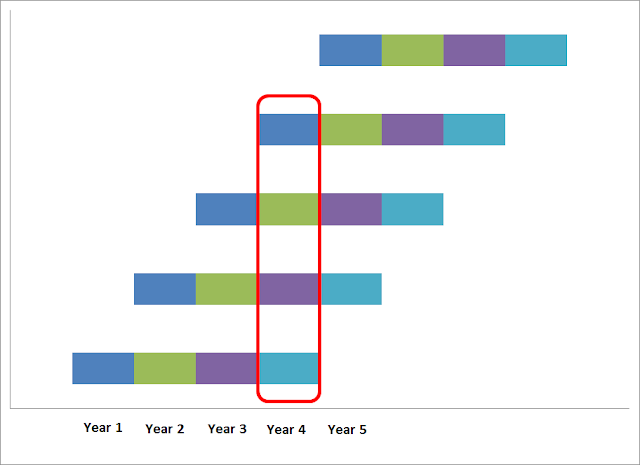 It’s very hard to walk away from this. If I leave now, even if the new employer also grants the same amount in RSUs, which it doesn’t, I will have to restart the cycle, collecting 1/4 in the first year, 1/2 in the second year, 3/4 in the third year, versus the full amount every year. Basically I will lose 1-1/2 times the value of the annual grant over a 3-year period. To me, that’s a 10% pay cut for 3 years.

I like the new job, but I’m not that desperate for a pay cut. I may end up turning down this new job.

Do you get RSUs at your job? What percentage of your base salary is the annual grant worth? Have you been in a situation like this? What do prospective employers do to unlock the golden handcuffs?