Nevertheless, as I predicted in the previous post When Will Your Index Fund Buy Facebook Stock? Vanguard still added Facebook to the Vanguard Total Stock Market Index Fund soon after the IPO. In the fund’s list of holdings as of June 30, 2012, Facebook shows up as holding No. 210 with 5.6 million shares worth $174 million in a $190 billion fund (0.09% weight). 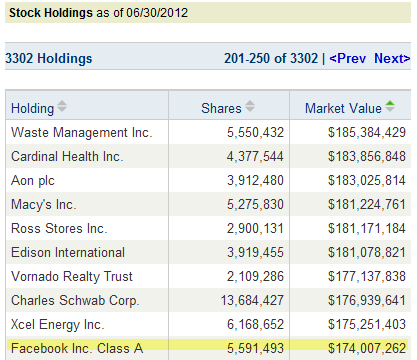 We don’t know what price Vanguard paid for Facebook shares. The lowest price Facebook ever got to before June 30 was $25.52 on June 6. Even if we assume Vanguard timed it perfectly and bought all 5.6 million shares at $25.52, the fund still lost at least $25 million on its Facebook purchase.

Research has shown that IPO stocks typically don’t do well when they first come out. Here MSCI and Vanguard decided they’d rather include IPO stocks sooner than later, against evidence from research.

That’s the price you pay when you invest in an index fund. Total means total, warts and all. Even if the Vanguard fund managers knew Facebook stock was a dog, they would still buy it. The compensating fact is that in a highly diversified fund, losses like this don’t have too much effect. The index fund had more money in discount apparel store Ross Dress For Less than in Facebook.