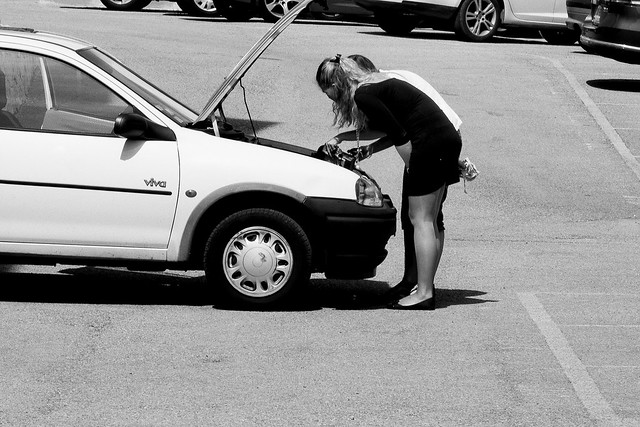 $600 later we had the pump replaced. We continued our trip, but we realized the next day the new pump wasn’t working quite right either. Although it didn’t make the noise, steering was very hard at low speed. By that time we were already hundreds of miles away from that repair shop.

We lived with it until we were back home. We went to our trusted mechanic. He said the original problem was likely caused by a cracked O-ring due to cold weather, which sucked air into the pump. Replacing the O-ring would’ve fixed it. The new problem, however, was directly caused by the “reman” after-market pump the other guy put in. If we had the original pump, we could’ve had it put back in, but we didn’t know to ask for the old part, and the other guy didn’t offer to give it to us either. Now we really needed a new pump.

Instead of ordering a new pump and putting it in for us, our mechanic suggested that we contact the shop that replaced the pump to see if they had any warranty from wherever they ordered the part. If so he could try to get it covered under warranty.

We called and we were surprised to learn that the other shop was part of a national repair shop network — the Goodyear Tire & Service Network. Work done at one participating shop carries a warranty good at any other shop in the network. Participating shops include both Goodyear company-owned shops and independent shops doing business under their own names.

We went to a participating shop near us that had good Yelp reviews. The service at this shop was much better than the one we ran into out of town. Although it took them two tries to have it fixed right, we didn’t have to pay anything. I imagine they are reimbursed by the Goodyear network.

In the end, we still overpaid for something that could’ve been fixed by simply replacing an O-ring. The silver lining was that by dumb luck we didn’t have to pay again to correct a bad fix. By directing us to contact the shop that did the original work, our trusted mechanic gave up a job that could be his. He’s in it for a long-term trusting relationship.

We learned that if we need car repair out of town again we should ask to have the replaced parts returned. Those parts may not be faulty. The replacement parts may be worse than the original. We also learned if possible we should choose a shop in a national chain or in a national network. That way at least we will have warranty when we go back home.

Have you run into car problems on the road? How did you resolve it? Any lessons to share?