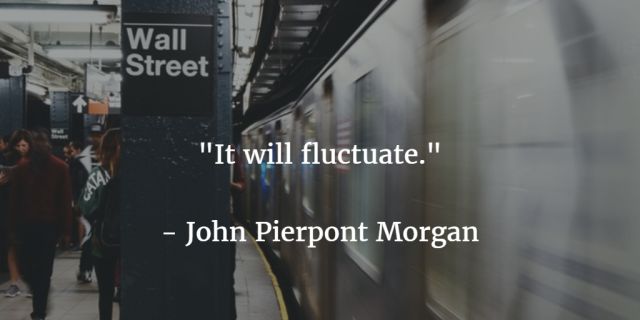 A reader emailed me in the weekend after Brexit and asked me what I did and what she should do. I told her I bought more shares in an international stock index fund even though I knew the price wasn’t going to be the lowest. On the other hand, I told her she should probably just stay put.

I was right about the price not being the lowest. The market dropped some more on the following Monday. If I had waited until Monday, the same number of shares would’ve cost about $1,000 less. My buying one day too soon caused me to overpay by $1,000, just like that, when normally people would go an extra mile to save $50.

Why buy then when you know the price isn’t going to be the lowest? Wouldn’t it be better to buy at a lower price? It would be if you actually buy at a lower price. It’s just that you also don’t know how much lower it’s going to go. If you waited for a lower price, and after actually seeing the lower price, you waited some more, hoping it would go lower yet, the price may turn back up and pass the original point. Your waiting would then make you come back empty handed or give up and pay a higher price than you originally would.

It’s better to make it mechanical. When it’s time to buy, just buy, even if you know the price isn’t going to be the lowest.

Stock prices made a quick turn this time. The selloff only lasted two days. Three weeks later the same number shares in that international stock index fund are worth $3,000 more.

Why then did I tell the reader to just stay put, as opposed to buying, as I did myself? Because I didn’t know what would happen. The prices could’ve gone down, and down, and down. While I would be OK with that outcome I didn’t know what the reader would feel. Most people get upset when they see their new money loses value. They actually get more upset from a small loss on new money than they are from a much larger loss on their old money (see previous post Old Money Versus New Money). I didn’t want this reader to get upset.

The market will always fluctuate. When you see a price good enough, just buy. If the market goes lower, buy again. Don’t hold off trying to swoop in at the bottom. When the bottom comes, you can’t tell, and you won’t be able to swoop in.