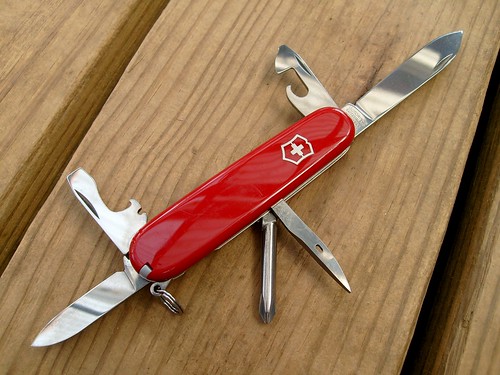 [This is a guest post from Bogleheads investment forum participant Bob’s not my name.]

Roth IRAs are touted as backup emergency funds: you can withdraw your direct contributions at any time for any reason, without penalty (and, of course, without tax, because you already paid it). This is a very nice feature. It allows young investors to put more into tax-advantaged retirement savings without fear of running short of liquid funds.

But a deductible traditional IRA can also be tapped penalty-free for some situations:

That’s a pretty good list of emergencies and major life goals. There is not the complete flexibility of Roth contribution withdrawals, but consider that many life emergencies will land you in a lower tax bracket: if you lose your job, if you lose your primary wage-earner spouse, if you become disabled, if you have a major medical event, if you or your spouse leaves work to return to school. In these cases the traditional IRA is preferred, because you will pay tax at a lower rate — a middle class family pays 15-30% federal tax on contributions to a Roth, vs. possibly 0-15% on withdrawals from a traditional IRA in some of the above situations.*

The medical expenses exception would allow a penalty-free and effectively tax-free withdrawal even if your tax rate is not 0%, since expenses over 10% of adjusted gross income are deductible. That is, if your AGI is $100,000 and you have a $20,000 medical emergency, the first $10,000 is paid from taxable funds and the next $10,000 can be paid with a traditional IRA withdrawal, penalty-free and tax-free. I simplified the math here. Note that this rule requires the taxpayer to perform some algebra, since there is a looping effect: the traditional IRA withdrawal adds to your AGI. So the correct math is: $10,909 is paid from taxable funds and the remaining $9,091 is paid with a traditional IRA withdrawal.

Most of these arguments hold true for a traditional 401k, since the 401k can be rolled over to a traditional IRA if you lose your job. If your emergency doesn’t involve a job loss, you can borrow from a 401k, and borrowing from your 401k does not involve an irreversible loss of tax-advantaged space, as a Roth IRA or traditional IRA withdrawal does.

Next, let’s consider a traditional IRA as life insurance. The higher income spouse, especially in a family with children, typically carries life insurance to provide for her family in the event of her death. Life insurance costs money, but we pay to insure against the financial hardship that would result from the primary earner’s death.

Let’s consider a family with a single wage earner and Modified Adjusted Gross Income growing from $115,000 to about $180,000 over fifteen years (i.e., 3% annual raises, and the family is in the child tax credit phaseout, but below the inflation-adjusted phaseout for eligibility for direct Roth or deductible spousal traditional IRA contributions). They’ve just had their first child, and plan on a couple more.

Now suppose the wage-earner dies. Every situation is different, but in many cases it is hard for a single parent with children to immediately return to work and earn an income that will more than cover child care costs and work-associated costs like commuting and fatigue spending (e.g., paying more for prepared food). Let’s assume our model family at this point includes children aged 15, 13, and 8. A likely — or at least desirable — outcome is that the widowed parent waits two or three years before returning to the workforce, by which time the older kids are driving and the youngest is in middle school. Even in an alternative scenario in which the widowed spouse returns to work immediately, his earning power after 15 years out of the work force is likely far lower than was the primary breadwinner’s.

Consider the widower’s advantages in the latter scenario. Overall he will be in a lower tax situation. He can withdraw from the inherited 401k as needed for income, and he can time these withdrawals as he likes to modulate his taxable income each year. He could thereby create no- or low-income years in which to convert his own traditional IRA to a Roth IRA and pay very little tax on the conversion — far less than the 36% he would have paid on Roth IRA contributions.

If a young couple chooses Roth IRAs when at least one is eligible for a deductible traditional IRA or they are not maxing out traditional 401k’s, they are assuming the next half century of their lives will turn out as they expect. But job loss, a period of unemployment, medical problems, disability, or death may intervene, and in these cases choosing pre-tax retirement savings will likely prove to be most tax-efficient. If that half-century does go exactly according to plan, pre-tax may prove to have been the inferior choice, but in that happy scenario the difference matters far less – it is analogous to having paid life insurance premiums but not dying. Furthermore, the investor who starts saving when young and encounters no bumps on the way to retirement is likely to retire early, allowing years in which to do Roth conversions at a low tax rate.

* For college expenses for your children, the question becomes more complicated: if you have a shot at financial aid you don’t want to withdraw from your traditional IRA during one of your base years, so you would want to tap the traditional IRA for the last three semesters (possibly excluding the final semester if the gradate will not be a dependent in the graduation year). Even then, you may or may not come out ahead vs. the Roth, depending on what phaseouts you are subject to when contributing vs. withdrawing (child tax credit, educational credits, AMT exemption phaseout, etc.)