First I want to emphasize that the whole point of my previous post was that it’s IMPOSSIBLE to miss the best 10 days in 10 years. The odds are 1 in 2.8 billion billion billion, which is like winning the Powerball jackpot with a single ticket purchase back to back to back. By the same calculation it’s equally IMPOSSIBLE to avoid the worst 10 days. But since they asked, I compiled some numbers for avoiding the worst 10 days in 10 years. So here you go, more meaningless stats.

The rewards for avoiding the worst days are equally as impressive as the penalty for missing the best days. Look at this chart: 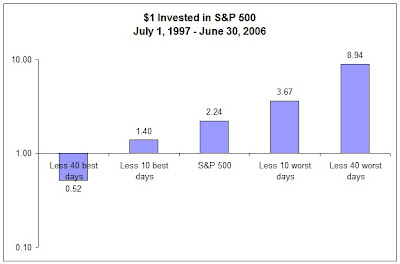 $1 invested for 10 years turned into $2.24 if left untouched. If the best 10 days had been missed (IMPOSSIBLE), it would grow to only $1.40, barely beating inflation. If the worst 10 days had been avoided (IMPOSSIBLE again), it would become $3.67, a huge jump. If both the best 10 days and the worst 10 days were taken out, they would cancel out each other — $1 would grow to $2.29, similar to the $2.24 number if left untouched. So don’t worry about missing the best days or try to avoid the worst days.