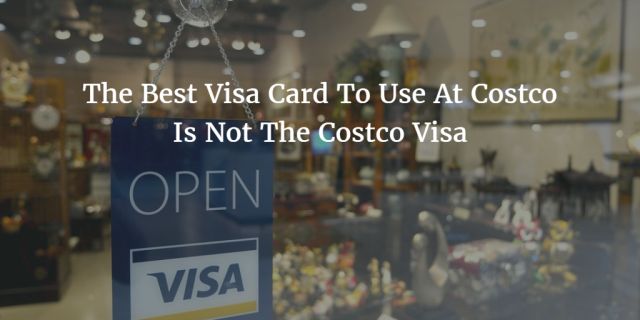 I don’t have the Costco American Express card. Nor do I have the new Costco Anywhere Visa card by Citi.

Now that Costco switched to Visa, you are able to use any Visa card, not just the new Costco Visa by Citi. As I predicted in my previous post Anatomy Of A Co-Branded Credit Card, it still remains that the best Visa card to use at Costco isn’t the Costco Visa.

You will get 2% rewards from the new Citi Costco Visa for purchases at Costco, which is better than the 1% rewards from the old Costco AmEx. Several Visa cards match it at 2%, including Capital One’s Spark Cash for Business and the new Fidelity Visa by Elan. Several other cards actually beat it by quite a bit.

The Bank of America Travel Rewards Visa with Preferred Rewards program at the 75% bonus tier pays 2.625% rewards on every purchase, whether at Costco or not. That’s a good 30% more than the new Costco Visa, without having to worry about which card to use where. Just use the same card everywhere.

The grandfathered Priceline Rewards Visa pays 3.33% on every purchase if you redeem the rewards against Priceline Name Your Own Price or Express Deals purchases. You get 2/3 more in rewards, although you must already use Priceline’s Name Your Own Price or Express Deals often enough to redeem your points at the higher rate. You also must already have a grandfathered Priceline Rewards Visa card because the current cards aren’t as good.

It gets better. The Bank of America Cash Rewards Card pays 2% on wholesale club purchases. At the 75% bonus tier in the Preferred Rewards program, it pays 3.5% rewards on Costco purchases. That’s 75% more than the Citi Costo Visa pays.

The rewards from the Bank of America card can be automatically deposited to your Bank of America checking account whenever you reach a threshold. You don’t have to wait until the end of the year. There’s a cap for $2,500 per quarter in combined grocery/wholesale club/gas purchases each quarter. At my spending level, I expect to come well under that cap.

Coincidentally, Chase Freedom card put wholesale clubs into its 5% rewards categories through the end of 2016. In the next several months, up to $1,500 in purchases in the special categories per quarter, using Chase Freedom at Costco will get you 2-1/2 times the rewards as using the new Costco Visa.