From time to time, people ask why not invest 100% in stocks. This question is always met with astounding objections. People say:

Someone on the Bogleheads investment forums collected the instances of people asking about 100% in stocks as a contrarian indicator of market tops. 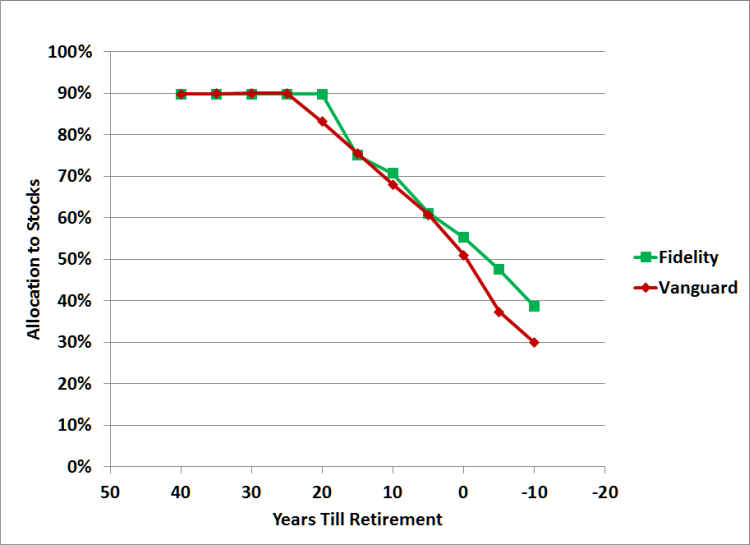 At 10% in bonds, the portfolio’s performance and volatility are going to be driven largely by the 90% in stocks. There’s no way that a small decoration such as 10% in bonds will make much difference. The decoration is there to plant the seed of the diversification concept early on. Even though it doesn’t do much yet in reality, it will be useful in the future.

Reasons for High Allocation to Stocks

It does. Vanguard has a lot more data than we do. It serves millions of retirement plan participants and millions of investors with IRAs and other accounts. It knows how much people make, how much they contribute, and how they behave during bull and bear markets.

Vanguard shares some of the data with us in its annual How America Saves report. According to the report, even during the chaotic 2008, only 14% of the retirement plan participants initiated any trades, half of which were buying stock funds instead of selling stock funds. The idea that everyone rushes out to sell when the market drops is simply not true, at least not true in retirement plan accounts.

Let’s not kid ourselves in thinking there’s a big difference between investing 90% in stocks and investing 100% in stocks. Those who invest 90% or 100% in stocks aren’t necessarily overconfident inexperienced investors who are destined to sell in a panic at the market bottom. The vast majority actually hold it and add to it like clockwork. Vanguard has data to prove it.

If you are young, investing 100% in stocks isn’t too far from what Vanguard and Fidelity recommend in their target date funds. If you’d like to be a little more aggressive, it’s perfectly OK. Just remember not to sell in a panic when the stock market crashes.