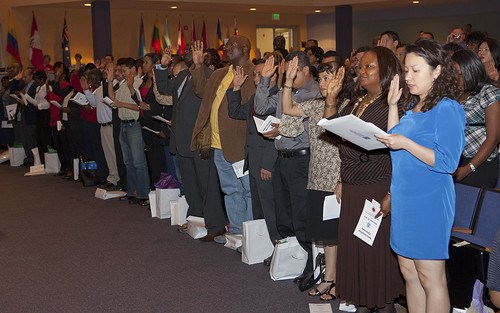 A team I work with at my employer is hiring a project manager. They included me as one of the interviewers. Interestingly, after the initial phone screens the three final candidates invited over for face-to-face interviews are all immigrants.

They don’t speak perfect English. Some started in fields completely different than the field my employer is in. Over time, they accumulated experience and achievements. Now they are all well qualified for the position.

I’m not the hiring manager. So I don’t know what the position pays. Judging from the grade level, I would say the job pays six figures. You would think immigrants don’t possess a special advantage when it comes to project management. In fact they may come at a disadvantage for not having been born and educated in this country.

What makes these immigrants stand out to become top candidates? Is it because they work harder?

I Googled "immigrants work harder" and I got this quote from New York mayor Michael Bloomberg on the first hit:

"I don’t think there’s any question, it’s the immigrants who are willing to work harder, on average," said the mayor of New York City, whose population is more than a third foreign-born. "Plenty of native-born Americans, tenth-generation here, that work very hard. So I’m not dissing everybody. But on balance, it’s no question that people come here, and they come here because they want to live the great American dream, and they don’t think it’s just going to be given to them or that they deserve it. They come with the ethic of wanting to work for it."

I would think everybody wants to live the great American dream and nobody thinks it’s just going to be given to them or that they deserve it, not just immigrants.

Back in July, I heard someone say in a Marketplace Money radio program on NPR that immigrants work harder because there is no/less social safety net in their countries. They must work hard or else they can’t live. Putting the political angle aside, there is some truth to it. When I go to a developing country, I see people there work very hard, much harder than people here.

Working hard is pretty much the only choice for immigrants. Working hard does pay off. It doesn’t necessarily make you rich but it isn’t too difficult to get into a comfortable life. People born and educated in this country have all the advantages over immigrants. If immigrants can become top candidates for six-figure jobs, so can the natives.

Are you an immigrant or from an immigrant family? It wouldn’t surprise me at all if a disproportionate number of readers are. If you aren’t one yourself, do you know or work with immigrants? Do you think immigrants work harder? If so, why?