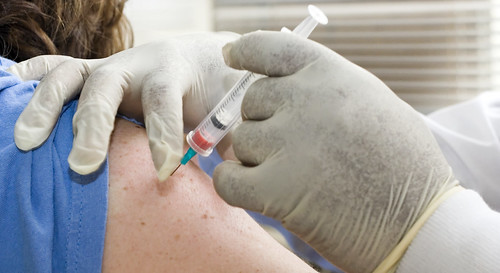 This year’s flu shot campaign seems to have started earlier than previous years. My employer had the on-site flu shot clinics in mid-September. I got the email from HR but I didn’t pay attention to the dates. I thought it would be later in October or November; so I missed the on-site dates.

Grocery stores, drug stores, and discount stores such as Costco, Walmart, and Target all advertise flu shots. A grocery store near me gives a 10% discount on grocery purchases if you have your flu shot there. I’m surprised that they don’t highlight that flu shots are usually covered 100% by insurance, not subject to any deductible or co-pay.

Flu shots fall under preventive care. Under the Affordable Care Act also known as Obamacare, preventive care benefits are covered in full. It’s not just starting in 2014 in plans you buy on a health insurance exchange. It’s now, in most employer-provided group health plans.

Actually it’s been that way since 2011. Most employer-provided health plans already amended the terms to comply with the new requirements under Obamacare.

If the pharmacy you go to is in-network with your health insurance, chances are your insurance covers your flu shot 100%. You don’t need a prescription. You don’t have to take time away from work and go to your doctor’s office or clinic on weekdays. The pharmacies in those stores have evening and weekend hours. It’s the most convenient way to get a flu shot.

I had my flu shot at a Target store near me on Sunday. It was super-easy and it was covered in full by insurance.

If you don’t have insurance, Costco advertises flu shots at $14.99. It’s the lowest price I saw.

Have you had your flu shot yet?