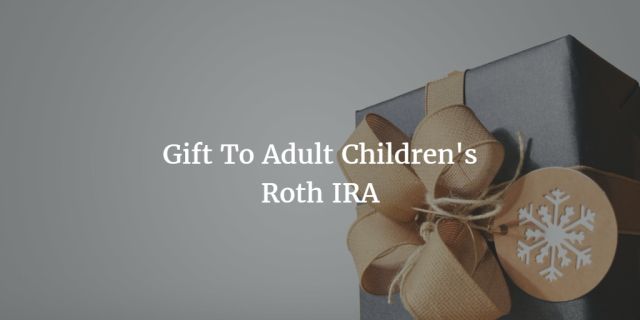 Speaking of the Vanguard podcasts, I listened to this episode released in April: The Roth IRA: An effective estate planning tool?

Diane Streleckis: And what about gifting with a Roth, does that make sense?

Is that right? Can you gift to someone else’s Roth IRA? $5,500 per adult child under 50, as long as they have earned income? Grandkids, brothers and sisters, nieces and nephews too?

We should see what the IRS says. IRS Publication 590A Contributions to Individual Retirement Arrangements (IRAs) is on point here. Under “Can You Contribute to a Roth IRA?” it says:

Under “How Much Can Be Contributed?” it says:

The contribution limit for Roth IRAs generally depends on whether contributions are made only to Roth IRAs or to both traditional IRAs and Roth IRAs.

Roth IRAs only. If contributions are made only to Roth IRAs, your contribution limit generally is the lesser of:

The income limit and the contribution limit are both on the IRA owner. There is no separate provision for contributing on someone else’s behalf (other than the spouse).

So the answer in the Vanguard podcast missed two big caveats. For “gifting with a Roth” to work, the recipient must have enough compensation, be under the income limit, and not have already used up the IRA contribution limit him- or herself. If you intend to contribute to someone else’s Roth IRA for wealth transfer across generations, it only works if they are eligible but they won’t contribute or they won’t contribute the maximum otherwise on their own. You can’t do it if they are not eligible to contribute in the first place. If they already contributed the maximum themselves, you can’t do it again.