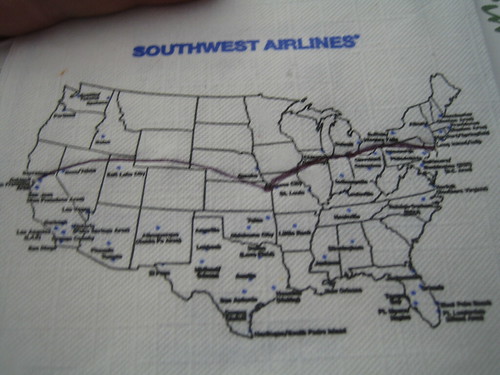 In addition to no change fees and including check-in bags in the fare, I like Southwest Airlines also because its frequent flyer program Rapid Rewards is the easiest to use.

Other airlines limit seats available for reward travel. I have miles but when I want to redeem them for a free ticket, I often find I can’t get reward seats on the flights I really want. With Southwest Rapid Rewards, I pretty much just use the points as cash to buy the ticket.

Southwest Airlines announced it will increase the number of points required for each $1 worth of fare in the least expensive Wanna Get Away class from 60 points to 70 points after March 31, 2014.

The same goes for any small fee not covered by redeeming rewards.

I priced a random Southwest itinerary in both in dollars and in points. In each case I picked the least expensive Wanna Get Away tickets.

You earn 6 Rapid Rewards points on a paid ticket. You don’t earn points on a reward ticket. I reduced the fare by 2% assuming one has a 2% cash back card. Between these two scenarios, paying money versus redeeming points, we are looking at a difference of $355 versus 22,902 points. That puts the value of a Southwest Rapid Rewards point at 1.55 cents each.

After the devaluation on March 31, 2014, a Southwest Rapid Rewards point will be worth 1.35 cents each.

Because you get six points for each dollar spent, buying a Southwest ticket basically gives you 8-9% delayed rebate.