While looking at 529 plan information, I came across an interesting tidbit. It also tells us something about investing in general.

Every state has a 529 plan. Some states have more than one plan. Which state has the largest 529 plans in terms of total assets?

Is it California, the state with the largest population? No. Many California residents go elsewhere because there isn’t any state tax benefit for using an in-state plan. California’s plan has less money in it than Alaska’s.

Is it New York, a large state where taxes are high and residents are offered a state income tax deduction for 529 plan contributions? No. New York residents are doing their fair share but New York isn’t pulling in big money from other states.

Is it Utah, whose plan is often ranked as the best in the country? No. Utah’s plan is doing quite well relative to Utah’s small population, but it only takes the #6 spot in the country.

The #1 state in the country with the largest assets in its 529 plans is Virginia, hands down by a mile. 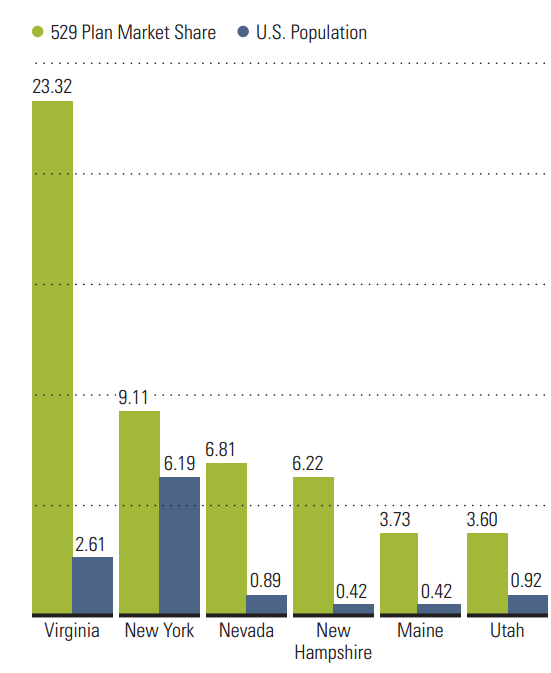 According to Morningstar, Virginia has nearly 1/4 of all 529 plan assets in the country. New York, the #2 state, comes in at less than half of the share taken by Virginia.

Why Virginia? One word: brokers.

Granted there are other funds and plans that also pay brokers, and American Funds and the Virginia plan must compete with those, I’m confident to say that without brokers the Virginia plan would be nowhere close to be #1 in the country.

That’s the power of distribution. Altogether, half of the 529 money in all plans are in broker-sold plans.

To all who think Vanguard Personal Advisor Services just unnecessarily charge 0.3% of assets for putting people in a handful of funds that look like a target-date fund, or that Schwab cheats by requiring a cash allocation in its Schwab Intelligent Portfolio product, or that Wealthfront is evil because their fees in dollars go up as your assets grow, let’s not forget that so many people still invest through brokers and they are paying a lot more.

If robo-advisors win over people from brokers, it’s a big win for the investing public. Just the other day a friend mentioned he had his account managed by someone at a broker branch. I asked him if he was paying a fee. He said he didn’t know. Then he said it was probably 0.1%. I think if he’s lucky it would be more like 1.5% after all is said and done. I won’t be surprised at all if it’s 2.5% or more.

That’s the investing reality. Whoever can reach people and sign them up charge an arm and a leg. That’s how they can afford the time and effort to reach people to begin with. We need all the marketing, PR, slick websites and mobile apps funded by venture capital dollars to change this.