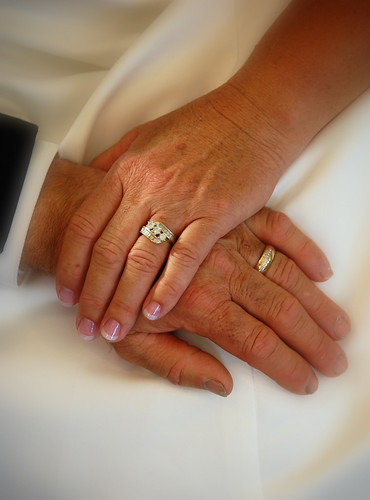 If you are not married yet, and you plan to qualify for the premium subsidy under Obamacare, think twice before you tie the knot.

Marriage gets in the way of getting affordable health care in several ways.

Although covering a spouse through an employer can be expensive, the spouse won’t be eligible for the premium subsidy because the spouse has access to an employer coverage and the employee-only coverage is still affordable. This is Box B in the flowchart posted by Professor Austin Frakt at The Incidental Economist.

Now suppose you are thinking of marrying someone who’s on Medicare but you are not. Medicare is an individual thing. If you are not 65 yet, you don’t qualify for Medicare just because you marry someone who does. You still have to buy your own policy.

Remember the subsidy, called the Premium Tax Credit, is calculated as the difference between the cost of the second least expensive Silver plan and a percentage of your income.

The cost of the second least expensive Silver plan for one person doesn’t change. Your affordability as measured by a percentage of your combined income goes up. Chances are you will no longer qualify for the subsidy when you marry. If you still qualify, the subsidy will be much less.

If you have a low income and you marry someone who has a higher income, your combined income may be over the 400% FPL cutoff. You lose the subsidy. That’s intended because we expect the higher-earning spouse to subsidize the lower-earning spouse.

Except even when the two of you each qualifies for a subsidy on your own, both of you may lose the subsidy when you marry. That’s because the subsidy’s cutoff point for two people isn’t twice as much as the cutoff point for one. The FPL for two is only 1.35x for one. When you put two incomes together, you can fall off the cliff together.

Even if you manage to stay on the cliff, you will still receive a lower subsidy when you marry, due to the fact that the FPL for two is much less than twice the FPL for one.

This chart shows the subsidies two people with the same income will receive when they marry versus when they stay as two singles. It’s based on quotes I see in my area for my age group. 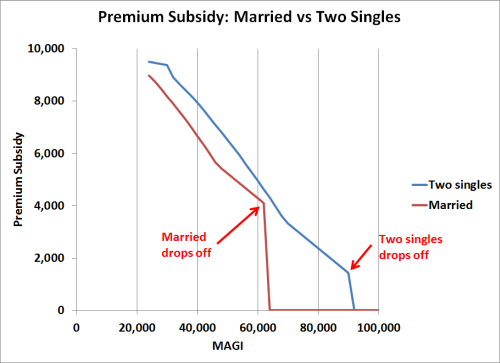 You see two singles receive more subsidies than a married couple at all income levels. Two singles each with $20k in MAGI will receive $7,900 in subsidies between the two of them. If they marry, as a couple with $40k in MAGI, they only receive $6,700.

After the married couple drops off the cliff at ~$62k in combined income, two singles continue to receive subsidies until their income reaches $45k each for a total of $90k combined.

If you are thinking a simple trick of doing married filing separately will fix all these, no dice.

The law says if you file as married filing separately, you will not be eligible for any premium subsidy at all, regardless of income. Only domestic abuse, abandonment, or other special circumstances (pending divorce?) may be exempted from the requirement to file a joint return in order to qualify for the premium subsidy.

Please read these related articles in the series about the Affordable Care Act: