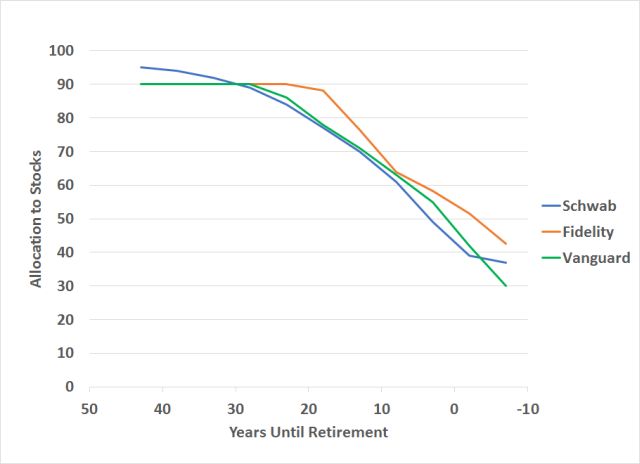 When it comes to target date funds — those with a year in the name designed as a one-stop portfolio for people who plan to retire around that year — Schwab now has two sets of them. One set, called Schwab Target Funds, were started earlier. They invest in a mix of actively managed and index funds. Their expense ratios run in the 0.33% – 0.75% range. The second set, called Schwab Target Index Funds,  were started more recently. They invest in Schwab ETFs. Their expense ratios are 0.08% across the board after voluntary fee waivers.

Purely based on the expense ratios, these Schwab Target Index Funds are almost 50% less expensive than Vanguard’s Target Retirement Funds and Fidelity’s Freedom Index Funds. They are a good alternative for invest-and-forget if you prefer to use Schwab. There is no minimum investment requirement.

In terms how each fund will adjust over time, if the strategy stays the same, i.e. the 2035 fund in 10 years will be like the 2025 fund today, the path looks very similar to that of Vanguard Target Retirement funds. They are in general somewhat less aggressive than Fidelity Freedom Index funds of the same target year. 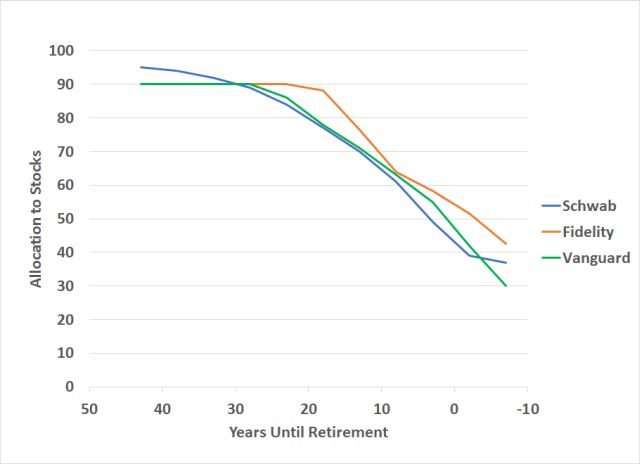 Because Schwab Target Index funds are new, they only have one full calendar year of actual performance. In 2017 when stocks did great and when international stocks did better than US stocks, Schwab Target Index funds in general had lower returns than Vanguard Target Retirement funds and Fidelity Freedom Index funds of the same target year. Whether they will perform better in the future will depend on how well stocks do in general and how well international stocks do relative to US stocks.

If you like Schwab’s services and you’d like to buy just one broadly diversified fund that automatically rebalances and adjusts over time, Schwab Target Index Funds are a reasonable choice, especially for an IRA, solo 401k, or a 401k brokerage window. Just remember to double check the word Index in the name.