I saved in my notebook this excellent post on the Bogleheads forum by the remarkable poster nisiprius: A time to EVALUATE your jitters. It was written on August 7, 2011, right after that turmoil began. At the end of the long post, nisiprius wrote:

“If we’re lucky, and the stock market comes back at least part way and seems to stabilize for a while… or if it comes roaring back and soars (yes, that’ could happen, too)… don’t forget how you feel right now. If you feel that you are close to the edge of your risk tolerance right now, then you have too much in stocks. If you manage to tough it out and we get a calm spell, don’t forget how you feel now and at least consider making an adjustment then.”

That time has come. It is now. It took about six months to recover from the turbulence. It’s time to reflect on what you felt, and more importantly, what you did during that time.

Did you sell stocks to avoid further losses? I doubt it. The behavior trait loss aversion makes it very hard for people to sell after the prices have already gone down. I would say “individual investors sell at the bottom” is a myth, not supported by facts.

Although there were net outflows from equity mutual funds during that time, the outflows were very small relative to the total amount invested in the funds. According to data from ICI — the mutual funds trade group — total outflows from equity funds between August and November 2011 were $80 billion. Total amount invested in equity funds? Over $5 trillion. That’s $5,000 billion. In other words, investors pulled out less than 2% of their investment in equity funds when the market was down. 98% of the money stayed the course.

So if you simply hung tight and didn’t sell, don’t pat yourself on the back just yet. Most others didn’t sell either.

Although the vast majority didn’t sell, some of them may have suspended buying. Between early July and early October 2011, stocks dropped sharply in three months of time.

When the market was dropping that fast, it was easy for some people to freeze up and wait for better days.

If you were buying before the drop, did you stop buying after the drop?

Nobody likes losses. However, if you were troubled enough by them that you stopped buying, it’s a sign you have too much risk in your portfolio for your risk tolerance. As nisiprius wrote, now it’s time to think about whether you need to do something about the mismatch.

Either harden yourself and get used to it — another drop like that can happen any day now — or take a step away from the heat. You want to have a portfolio mellow enough that you are comfortable with continuing buying into it even when the market is dropping.

Still, because the drop didn’t last long, I doubt many messed with their dollar cost averaging in their 401k plan accounts. Again, continued buying due to inertia is just average.

If you have stock funds or ETFs in a taxable account, did you harvest losses? It was a good time for tax loss harvesting. If you did, you would have created or added to your capital loss, to be used to offset your income for years to come, $3,000 at a time. The harvested loss will also cushion any capital gains you may have to realize in the future.

Tax loss harvesting takes a deliberate action. If you did that, you did something most others didn’t.

Continuing buying at lower prices with new money is great. Buying more with existing money is even better. That’s rebalancing. Did you chicken out and not carry out rebalancing as you originally planned?

Here we are seeing a 5% band-triggered rebalancing worked better than a calendar-based rebalancing method. A 20-30% drop in stock prices should’ve lowered the weight in stocks by 5% or more in most portfolios. 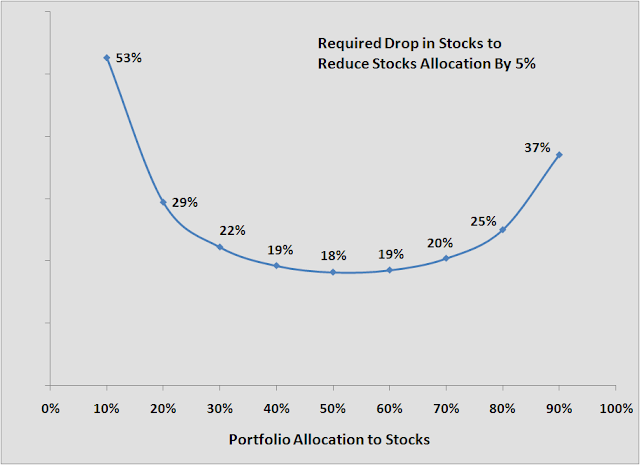 If you used a 5% rebalancing threshold, you would’ve sold a chunk of bonds to buy stocks, near the low in early October. If you waited until December or January for your calendar-based rebalancing, the low prices were gone by that time.

If you did rebalance last summer, with the recent surge in the stock market, are you close to another rebalance in the other direction?

Now it’s reflection time. Action speaks louder than words. There is a big difference in knowing what you are supposed to do and actually doing it. What did you do when the market was down? What does that tell you about the risk-appropriateness of your portfolio?