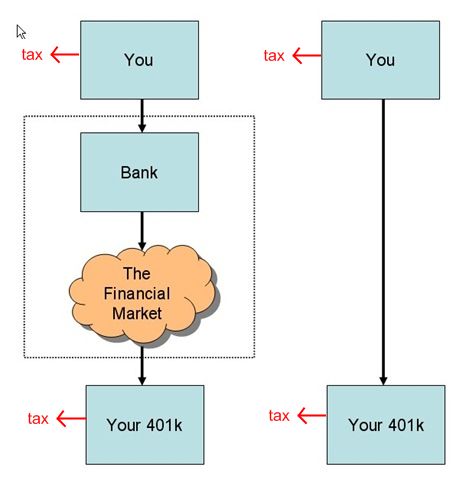 I don’t know who started it. Suze Orman certainly helped spread it. She says that you shouldn’t borrow from your 401k (or 403b) plan because you will be double-taxed. I did a Google search and I found 5 priceless money-saving tips by Suze Orman:

“Also, never ever borrow against your 401k plan because you will pay double taxation on the money you borrow. Because you don’t pay taxes on the money you put into a 401k, when you pay back the loan (which you must do within five years, or 15 years if used to buy a home), you pay it back with money you have paid taxes on. Then, when you retire and take the money out again, you end up paying taxes on it a second time.”

This allegation is all over the place. It is a myth because there is NO double taxation. It’s a mind trick similar to that well-known “where’s the missing dollar” puzzle.

Now, back to our 401k double taxation myth. The fact that the loan has to be repaid with after-tax dollars is irrelevant, just like the $30 number in the hotel puzzle. If you didn’t borrow from the 401k plan but you borrowed from a bank, you’d have to pay the bank back with after-tax dollars as well. If you didn’t borrow from your 401k plan but you dipped into your own savings, you have to replace those savings with after-tax dollars too. What it really means is that a 401k loan is not tax deductible, just like any other consumer loan except a mortgage or a HELOC. Instead of saying you will be double taxed, they should just say that a 401k loan is not tax deductible, plain and simple.

I have this post in draft for a long time but Jonathan at My Money Blog beat me to it recently with two posts trying to debunk this myth (post 1, post 2). After so much discussion some folks are still not convinced. I think this issue is best illustrated by this chart below:

The right hand side represents a 401k loan. Now, if you put an imaginary box in the middle on the right hand side, it becomes exactly the same as the left hand side. You borrow from an imaginary middleman and pay after-tax dollars for both principal and interest. This imaginary middleman then borrows from your 401k and passes the same dollars it receives from you to your 401k. All of a sudden you are not double taxed any more because it looks exactly the same as a car loan on the left hand side. Because this middleman is only imaginary, it follows that you are not double taxed with a 401k loan, whether for the principal repayments or for the interest.

Whether or not you are mathematically better off with a 401k loan depends on how these three rates play out:

Suppose your alternative after-tax interest rate from a bank loan is 7% and the interest rate on your 401k loan is 5%. If you borrow from your 401k, you save 2% in interest cost in after tax dollars. But also suppose the bond funds in your 401k are expected to earn 8%. If you borrow from it, your 401k plan can only earn 5% from you. So your 401k plan account is 3% worse off in before-tax dollars. Between 2% better off after tax and 3% worse off before tax, it can become a wash. The reason you have to compare it with what bond funds can earn is because the 401k loan payments are not subject to market fluctuation. If you do borrow from your 401k, increase your allocation to stocks for what’s left in the plan.

While there is no double taxation on a 401k loan, there are other negatives on borrowing from your 401k plan. The biggest negative is that if you change jobs (voluntarily or involuntarily), you often have to repay the outstanding balance of the loan within a short period of time, like 60 days. Some plans actually allow you to continue the loan repayment even after you terminate employment, but not all plans do that. If you really need cash and you don’t have any other source except your 401k, taking out a 401k loan is at least better than taking a hardship withdrawal from the plan. Just be absolutely sure you will be able to repay the loan and you won’t change jobs before paying off the loan. And don’t reduce your regular 401k contributions while you are paying off the loan.