Today we look at how dividends and capital gains will be taxed after the fiscal cliff deal, officially known as the American Taxpayer Relief Act of 2012. Don’t be surprised it gets a little more complicated.

I did my best in this chart below to represent the rate(s) at which the qualified dividends (QD) and long-term capital gains (LTCG) are taxed. Even my best effort doesn’t capture the complications brought by AMT and many other phaseouts. 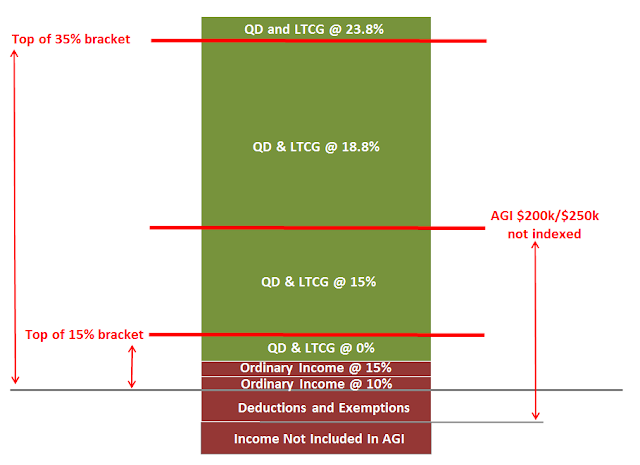 The chart should be read from the bottom up. Picture pouring your income into an empty bucket.

At the bottom sits your income not included in the Adjust Gross Income (AGI). These include your tax exempt income from muni bonds, and your pre-tax 401k/403b/457 contributions, health care premiums, and FSA/HSA contributions deducted from your paychecks if you are working. For retirees, they include your untaxed Social Security benefits, Roth IRA withdrawals, and withdrawals from your own savings. They also include your above-the-line deductions: deductible IRA contributions, contributions to self-employment retirement plans, student loan interest, moving expenses, etc.

Next comes your personal exemptions and your standard or itemized deductions. These are in the AGI but they are deducted before you apply the tax schedule.

As your ordinary income (the red block) goes up, it’s going to push up the QD and LTCG (the green block) to higher rates. If your red block is already above the first red line, then your QD and LTCG will be taxed at a minimum 15%, and possibly some at 18.8% and some at 23.8%.

Add another 1-2% if you are in the new exemption and deduction phaseout zone (AGI above $300k for married filing jointly and $250k for single; the upper bounds are difficult to calculate).

Add an unknown percentage if your QD and LTCG puts you in one of many AGI-based phaseouts. For example if an extra $100 of QD or LTCG taxed at 15% causes you to lose another $25 in a tax credit, that $100 is really taxed at 40%. The exact percentage to add depends on which phaseout(s) you land in.

If you just want to know at what rates your qualified dividends and long-term capital gains will be taxed, it’s not that easy to figure out because of all those phaseouts. The chart in this post gives you the minimum rates. Your actual rates could be higher, and possibly much higher.

The new law is very generous to wealthy retirees, especially early retirees. When you manage your income to stay under the top of the 15% bracket (close to six figures for married filing jointly after you include exemptions and deductions), you can harvest capital gains every year. Eventually all your qualified dividends and long-term capital gains will be tax free!