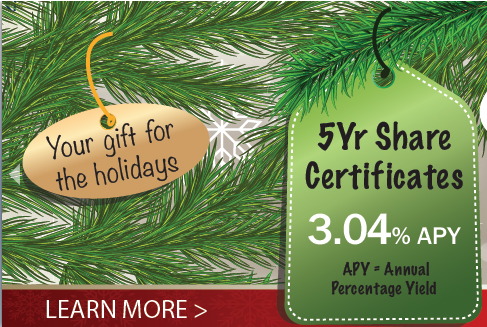 This is a very good rate. By comparison, other institutions that usually offer good rates still have their 5-year CD rates at 2% or below. Early withdrawal penalty is one year of interest but it doesn’t eat into principal. If you withdraw in six months because another bank is offering an even better rate, you only forfeit six months worth of interest.

I took the opportunity and bought some. Unlike the credit union where I have my reward checking account, PenFed offers good online service. I was able to do it completely online and have the money in the CDs in less than 48 hours. I didn’t have to call anyone. Nobody called me.

Being a federal credit union, PenFed is of course insured by the NCUA, which offers identical insurance as the FDIC for banks, for up to $250k per registration type.

Everyone can join PenFed. Just go to penfed.org and click on the Join PenFed link at the top.

As with most credit unions, you must keep $5 in a savings account which they call a “share account.” The online application to open the savings account is very simple. It didn’t even ask those tricky ID verification questions based on credit reports. When I opened an account at another bank I was asked which of four counties I ever lived in. The correct answer was the county where I went to graduate school 20 years ago.

If you are buying a regular CD outside an IRA, you can open one online right away. PenFed can pull the money in by ACH but they limit you to $25k per day when you are a new member in the first six months. If you want to buy more, you can do $25k a day over several days or you can just use ACH push from your source.

Do the reverse when you break a CD or when the CDs mature. Put the CD proceeds in the savings account before pulling it out to where you want the money to be.

You can also transfer a part of your IRA to PenFed and put the money in CDs. Find the IRA application PDF package in the forms section. It includes a transfer form. PenFed will send it to your current IRA custodian and get the money in.

One CD or Multiple CDs

PenFed doesn’t offer a rate lock. The rates theoretically can change any day. Given that their promotion banner says “Your gift for the holidays,” I doubt they will take away the gift before the holidays are over. That wouldn’t be very nice, would it? Chances are good that the rates will be offered until the end of the year, but don’t wait too long.

By my estimate these 3% 5-year CDs will beat a typical intermediate-term bond fund in the next five years. I will explain why next week. The rate is also higher than my mortgage rate. Remember it’s not all-or-nothing. You don’t have to be in all CDs or all bond funds. Invest in both CDs and bond funds.