Questions from some readers on my post about PenFed CDs versus bond funds in the next five years reminded me something I’d like to bring to the attention of all readers, not just those who follow the comments.

Back in February I wrote Invest In Long Term Bonds Now? At that time I was pondering whether I should move my muni bond investment from intermediate-term to long-term, especially when the average maturity of Vanguard’s long-term muni bond fund didn’t appear that long.

Back then Vanguard reported these numbers for its intermediate-term and long-term muni bond funds:

For one extra year in average duration, the SEC yield on the long-term fund was 30% higher.

Because the average duration was similar, you would think the performance would be similar too, but that’s not the case. The two funds were close until June. Then they started to diverge when the Fed started talking about tapering. The gap is still not closed as of late December 2013.

The gap can’t be explained just by one extra year in average duration. I will spare you the math but I can tell you that’s not it. 6.1 years versus 5.1 years doesn’t make one fund nearly double the loss of the other, especially when you also have a higher yield coming in dampening the effect of principal loss.

It appears that the average duration reported by Vanguard is not a reliable indicator for how a muni bond fund would behave in response to interest rate changes.

The gap in average duration between the two funds grew from one year in February to two years in December. The gap in SEC yield also grew to one full percentage point. Did Vanguard managers decide to make big changes to the funds?

For Vanguard municipal bond funds, actively managed taxable bond funds, and non-Vanguard bond funds, average maturity is the average effective maturity of holdings, defined as the average length of time until fixed income securities held by a fund reach maturity and are repaid, taking into consideration that an action such as a call or refunding may cause some bonds to be repaid before they mature.

A call means the issuer can choose to repay the bond sooner than the stated maturity date. Many, if not most, muni bonds can be called. When interest rates are low, a bond with 30 years to go and a call date coming up in 2 years is considered as likely to be called in 2 years. If interest rates go up, the probability of it being called goes down. The issuer may decide to stick with it longer, maybe all the way to the end, making the bond a true 30-year bond.

You see this effect if you look at the actual holdings of the bond fund. Vanguard reports the maturity breakdown for the long-term muni bond fund like this: 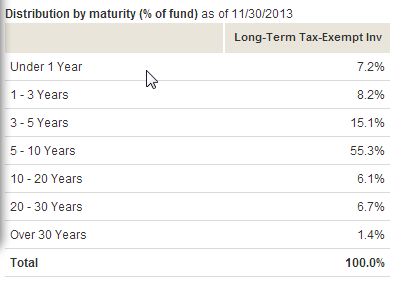 Which is right? 14% or 66%? Probably neither. Some bonds will be called before the official maturity date. Some bonds are estimated to be called as of now but probably won’t be if interest rates go up; or they will be called later than the current estimate.

I would suggest taking the reported average duration of long-term muni funds with a grain of salt. Even though the number is technically correct as of now, you may be investing in bonds with a longer term than you thought.