I said in a previous post in December that I would do a small experiment on my IRA contribution for 2012. See  Lump Sum, Dollar Cost Average, Or Wait for Dip? Instead of contributing $5,000 at the first opportunity (January 3 this year because January 2 was a holiday), I would wait for a small dip because prices almost always go down during the year. 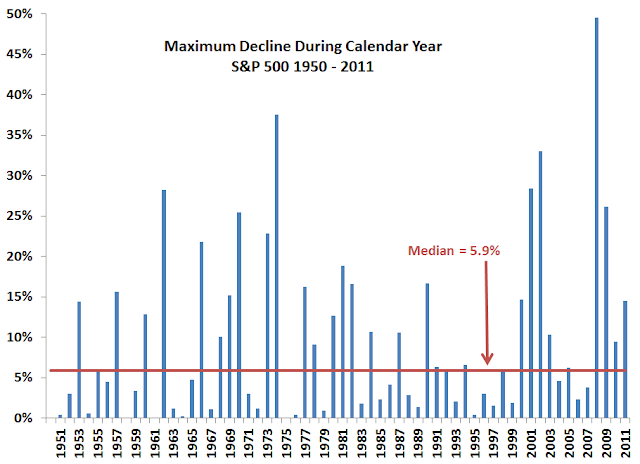 Being chicken little, I didn’t want to wait too long. So I set my limit at 2%. I took a note of the closing price that I would’ve got had I done what I always did in previous years: go all-in on day one. I set an alert based on that closing price minus 2%. If I could get in at a price 2% lower than I otherwise would have, I would be satisfied and call it a day.

Because international stocks did poorly in 2011, my IRA contribution for 2012 was going into Vanguard Total International Stock Index Fund Admiral (VTIAX) to balance it out. Since I’m doing a Backdoor Roth, I would’ve contributed $5,000 to a money market fund on January 3 and exchanged it into the fund in my Roth IRA on January 4. The closing price for that fund was $22.39 per share on January 4. My $5,000 contribution would’ve bought $5,000 / $22.39 = 223.314 shares if I bought on January 4.

The extra 4.684 shares are worth about $100. The value will go up and down with the market but it’s money that I wouldn’t have got. It’s possible that yet a lower price will come in the near future but I’m not aiming for the lowest price here. It’s impossible to hit the lowest. I just want a lower price than my other alternative.

I see the extra $100 as a small reward for having patience. $100 for waiting just two days isn’t bad at all. It didn’t take much effort.

You probably heard of the marshmallow experiment on delayed gratification. Studies showed that kids who were able to delay gratification had better long term success.

Is it all luck? Maybe. I’m sure there will be a year I will be waiting all year only to see the price going up higher and higher. I don’t know if I want to chase that kind of market. Maybe the $100 in other years along the way will make up for it. Maybe not.

Am I going to sell everything in my retirement accounts on the first trading day every year and wait for a 2% dip to buy back? Of course not. I’m not recommending this to anybody. I’m just sharing the experience from this experiment. Don’t try this at home if you are not willing to accept the consequences.