If you dread another tax form, relax. Form 5500-EZ is very easy to do. My plan is with Fidelity. I received my Retirement Plan Annual Valuation Statement from Fidelity last week. With the information from Fidelity, I completed Form 5500-EZ in less than 5 minutes.

Here’s a filled-out example (click on it to see page 2): 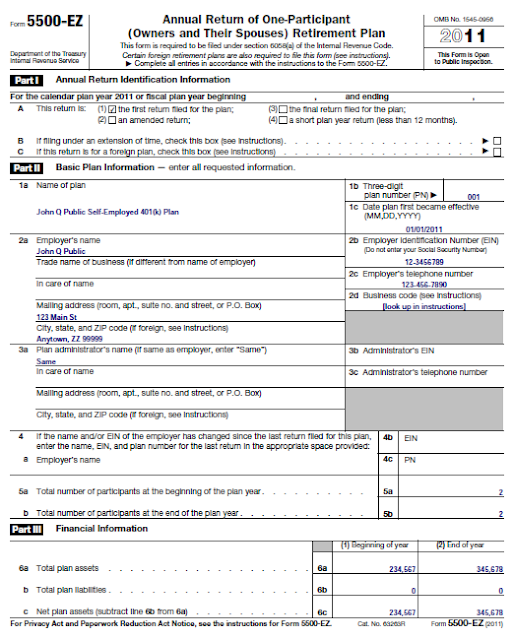 Besides the usual Tax ID, name, address and phone number entries, Form 5500-EZ asks about the plan’s assets at beginning of the year, at end of the year, and the total contributions during the year. As far as the numbers go, that’s it, very simple. I get those numbers from the annual valuation statement from Fidelity.

For money contributed in one year for the previous plan year, you can either count it in the year it was actually contributed (the “cash method”) or you can count it on the form for the previous year (the “accrual method”), but once you pick a method you should stay consistent with that method from year to year. To me the cash method is easier because it matches the report from Fidelity.

If you are filling out Form 5500-EZ for the first time, you have to look up a few codes in the Form 5500-EZ Instructions. The second time you just copy from the previous year. For my plan:

That’s it. Form 5500-EZ is really easy, but you have to remember to file it. The deadline is July 31 each year for calendar year based plans. If you forget, the late filing penalty is $25 per day up to $15,000! Use Certified Mail and keep proof of mailing.

No spam. Unsubscribe any time.